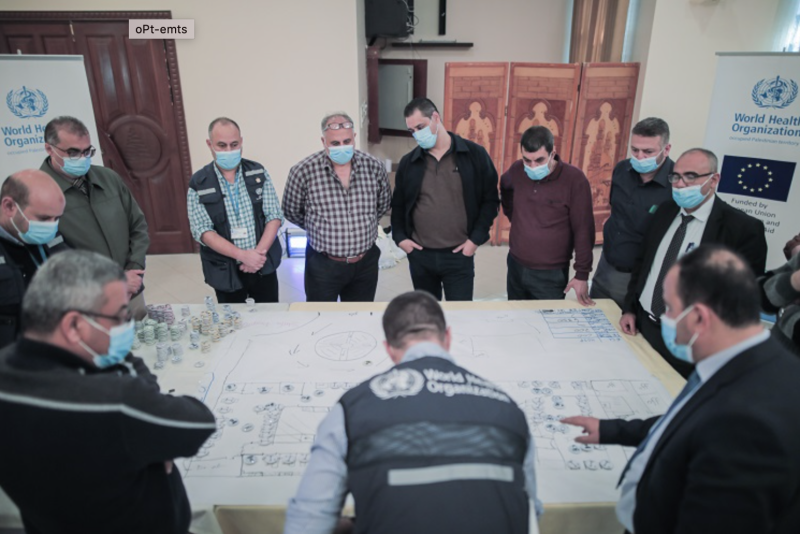 The World Health Organization (WHO)’s long-term support for increased preparedness and response capacity in the occupied Palestinian territory, including the Gaza Strip, proved vital during the escalation of violence from 5to 7 August 2022. This ongoing work has enabled hospitals to activate mass casualty management plans, prepositioned supplies to be mobilized, and urgent provisions to be delivered to hospitals, attesting to real change on the ground in the way health care workers are able to respond in the sudden onset of disaster.

WHO began delivering virtual mass casualty management training courses in 2020, in conjunction with the NYC Medics Global Disaster Relief. This online training proved its effectiveness during the May 2021 escalation, when trained health care workers were shown to perform at a higher level.

WHO then followed up with in-person training to equip hospitals with a standardized, unified mass casualty management plan allowing efficient response to complex emergencies such as the current one. Six (6) out of 7 hospitals in Gaza and 2 out of the 8 targeted hospitals in the West Bank have now been upscaled with mass casualty management training and plans based on the WHO Academy training guidelines, with additional technical support from the Trauma Operational Advisory Team (TOpAT) based in WHO’s Regional Office for the Eastern Mediterranean.

Another significant WHO investment in increasing the preparedness of the health system when faced with emergencies was the development of 2 national emergency medical teams (EMTs) in the Gaza Strip with tailored training and standard operating procedures combined with the prepositioning of equipment and supplies. With support from the European Civil Protection and Humanitarian Aid Operations (ECHO), Swiss Development Cooperation (SDC) and the Italian Cooperation (IACS), critical stocks are replenished for use in times of crisis.

WHO has initiated the process through which the 2 EMTs will become WHO-verified as national EMTs testifying for the increased preparedness of the health system in the Gaza Strip.

With endorsement from the Ministry of Health to the EMTs initiative at high level, a number of various health professionals – doctors, nurses, logisticians and pharmacists already working at different primary health care levels, ambulance services or hospitals – were pre-identified as the EMT members and ready for deployment when triggered.

Due to the sheer volume and urgency of cases, hospitals responding to mass casualties require a different mindset altogether involving the hospital manager, heads of departments (including the Emergency Department), nurses working in the ICU, pharmacists, laboratory workers, and logisticians. With the WHO-provided training, heads of emergency departments receiving casualties are now equipped with the level-headedness that results from a structured approach, an understanding of the trigger points for various response levels and an awareness that each level is backed by specific plans to be carried out by trained workers – in addition to the existence of EMTs to be deployed as the need arises to support any echelon of health care, from the pre-hospital level to rehabilitation, and post-discharge from the hospital.

Continuously reeling from one cycle of escalation to another, the health care system in Gaza is in a protracted crisis causing chronic shortages of health care supplies and medicines. The impossible decision of whether to utilize available supplies and medicines for ongoing patient treatment or to stock them in readiness for the next crisis must often be made. Additionally, despite prepositioning some equipment and supplies in stock, they can only suffice for one or two days of mass casualties before additional external support becomes necessary.

WHO’s immediate response to the surge in needs

On the second day of the recent escalations, the Ministry of Health mobilized some of the EMTs’ pre-stocked tents, supplies and equipment to expand the capacity of the emergency departments of 3 public hospitals by setting up a supplementary management area beside the Emergency Department to cope with the surge in casualties. In response to the Ministry of Health’s appeal, WHO immediately allocated emergency funds for the procurement of critically needed medicines, equipment and supplies, and is in the process of mobilizing an additional US$ 1.2 million to respond to part of the Ministry’s appeal.