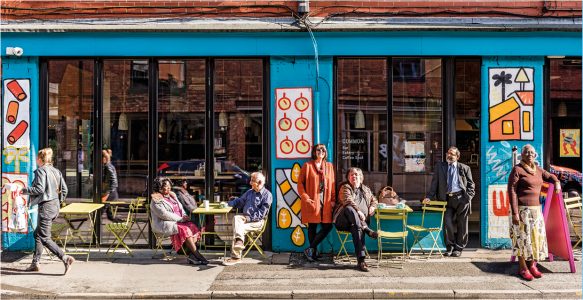 In 2010, Manchester became the first UK city to join the World Health Organisation (WHO) Global Network of Age Friendly Cities and Communities.

AFM bases its work around the city’s ageing strategy Manchester: A Great Place To Grow Older which was launched in 2009. The strategy was updated and relaunched in 2017.

The city’s ambition is that as its citizens age they remain independent, able to maintain good health, strong social and cultural connections, and have access to healthy, good quality employment.

We believe it is paramount that older people have agency and a voice in shaping the life of the city. Just as importantly we need to challenge the inequalities people experience in later life, particularly around ageism.

Our programme is based upon effective partnerships across the public, voluntary and private sectors; a focus on neighbourhood working; and our special relationship with the city’s universities. We put engagement with older people, their experience and their influence, at the heart of our work.

Demographics
Manchester is the United Kingdom’s second largest metropolitan area and the economic centre of the North West England Region.

Unlike many similar sized UK cities, Manchester has a growing younger population, which is boosted by the city’s large student population and its appeal to younger professionals as a place to live and work. This has resulted in the city having a relatively smaller older population which is, however, more isolated and experiences higher levels of inequality.

Social and economic circumstances have a great impact on how people experience older age and upon levels of inequality. 36% of the Manchester’s older residents are income deprived, while 59% of older people live in our most deprived neighbourhoods.

(1) Age-friendly neighbourhoods – creating places where people can age well in the neighbourhoods of their choice, with access to the right services, housing, information and opportunities – social, cultural or economic.

Some recent examples of how we are addressing this priority include:

(2) Age-friendly services – developing services which are age-friendly and age-aware, which value and retain their older workers, and where commissioning includes age friendliness in its specification.

Some recent examples of our focus on the value of older workers, includes:

(3) Promoting age equality – addressing the negative images and portrayal of ageing that older people tell us negatively impacts on their confidence, self-esteem and mental wellbeing.

Some recent examples of how we are addressing this priority include:

Governance, engagement and collaboration
The programme is based on collaboration and partnership, with a leading role for older people. Examples include: