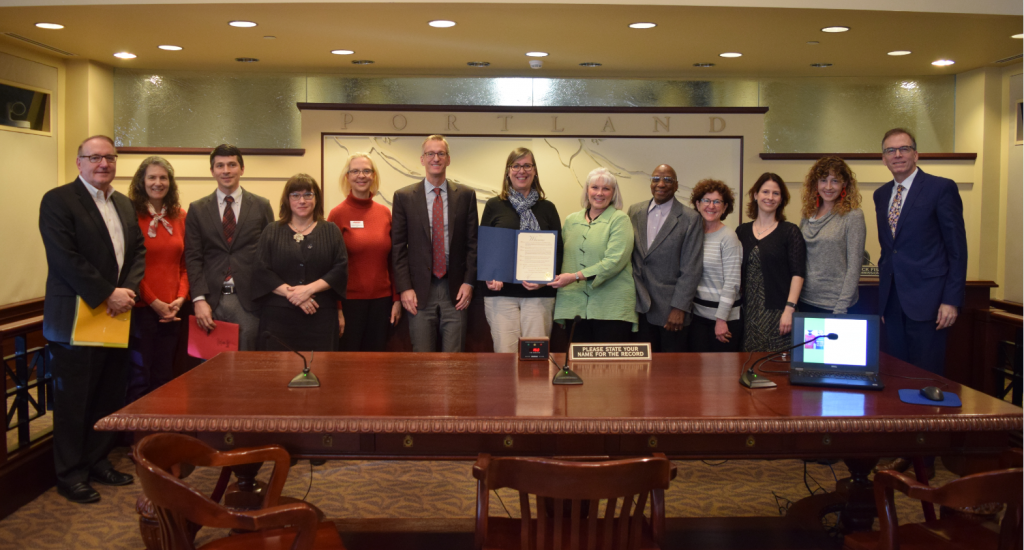 In 2006 the city of Portland, through Portland State University’s Institute on Aging, was the only city in the United States of America to participate in the original WHO Global Age-Friendly Cities project. The research for the project involved conducting a baseline assessment of the city’s age friendliness. This gathered data through focus groups with older adults, caregivers of frail older people, and representatives of the public, business, and non-profit service sectors on age-friendly features and barriers in the city, and suggestions for improvements. Four years later, Portland (again through the university’s Institute of Aging) became one of the original members of WHO’s Global Network for Age-Friendly Cities and Communities (1). In 2013, the surrounding Multnomah County (one of 36 counties in the State of Oregon) was also accepted into the Network.

Portland’s initiative is committed to making its community friendly for people of all ages. Priorities for action are:

● examining, revising, and developing City policies aimed at making the city more age friendly with respect to its physical environment, to date focusing on housing, transportation, and design;
● improving the economic environment for older adults both as consumers and as workers, including advancing opportunities for retraining and exploring new career options, and ensuring that workplaces in the public and private sectors accommodate ageing individuals;
● engaging older adults and people from all ages and abilities to shape Portland’s age-friendly efforts, both through the Civic Engagement committee and by engaging community stakeholders in public advocacy.

TheInstitute on Agingis the backbone organisation of Portland’s age-friendly movement. It coordinated the initiative without funding until 2016, when the City of Portland began partial support of the initiative. Implementation of policy is by government, non-profit organisations and business. Both the City and the County initiatives are overseen by a single Age-Friendly Advisory Council of Portland and Multnomah County. Other key players include the mayor and City Council, and the members of five working committees (economic development and employment; civic engagement; housing; transportation; and health services, prevention and equity). Older adults are included in each of these committees and the Advisory Council. Sectors involved include non-profit organisations (ageing services, social services, and advocacy), business, education, and government (city, county, regional, state, and federal). 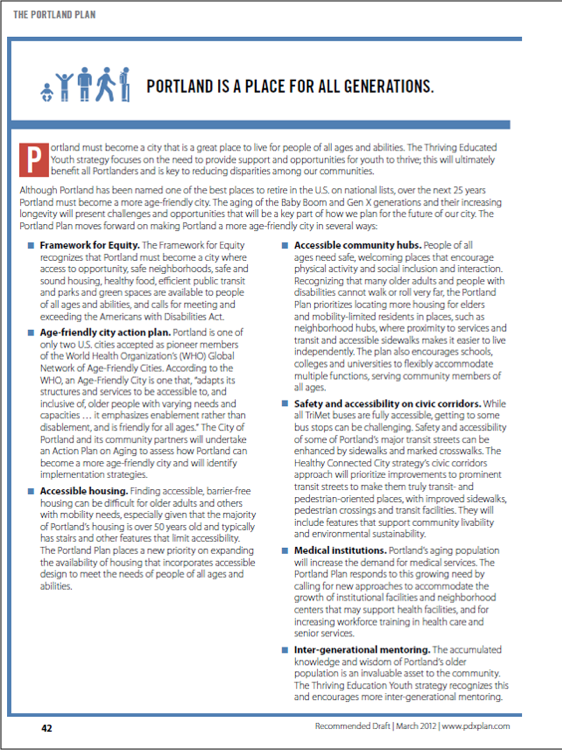 © Portland, Oregon; United States of America - Portland is a place for all generations

Economically, Portland weathered the financial crisis of 2008 and has experienced increases in jobs, higher household incomes and a more educated workforce. In 2018 Portland was ranked the seventh most liveable community over 500,000 people in the USA (4). However, while economic expansion has resulted in rising prosperity for many, minority communities have seen substantially lower increases in household median incomes (5). In addition, its robust population and economic growth over the past 15-20 years has coincided with traffic congestion, growing income inequality, declining housing affordability, homelessness, and displacement (6). A decrease in the city’s liveability has been captured in annual surveys by the City of Portland’s Auditor’s Office, which showed 79% of Portland residents rating the city’s livability as good or very good in 2012, but only 63% did so in 2016 (7).

Portland’s strategy has been to shape policy to be more age friendly,to create sustainable, long-term change that will benefit both current and future generations. Although policy change can be less immediate and tangible than, for example, improvements to physical infrastructure, the benefits are seen as potentially longer-lasting and more wide-spread.

Three policies provide examples. First, an age-friendly-related section, Portland is a Place for all Generations, was included in the city’s 20-year vision document, The Portland Plan (8). Second, the Action Plan for an Age-Friendly Portland was adopted by City Council in 2012 and has guided the initiative’s work (5). Third, and seen as most important, an equitable housing goal and 10 age-friendly policies on urban form, design and development, housing, and transport were included in the city’s 2035 Comprehensive Plan, which took effect in May 2018 (9). 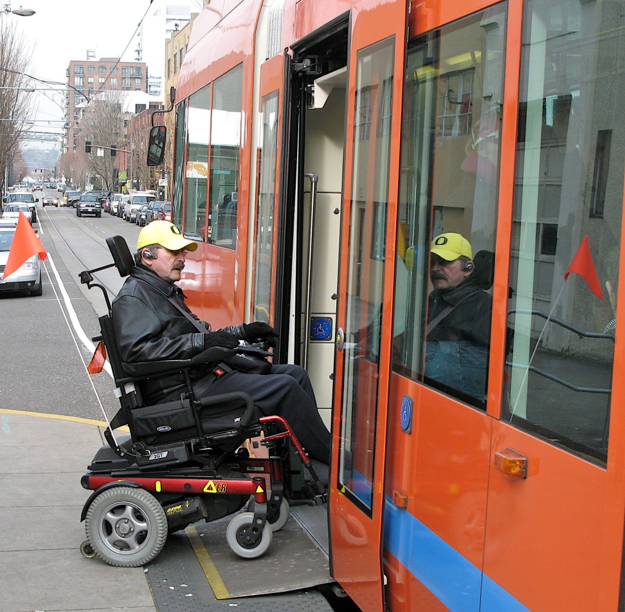 In addition to the focus on policy, there have also been wide-ranging improvements to the physical accessibility of Portland’s environments since the age-friendly baseline assessment was completed in 2007. These include improved accessibility of City Hall’s council chambers, inclusive pedestrian paths in Portland’s South Waterfront neighbourhood that accommodate the blind-low vision community’s need for tactile markings to separate cyclists and pedestrians, a federal exemption given to Portland’s streetcar that allowed a trip hazard to be removed from the ramp into the streetcar, and improved access, safety and signage for Portland’s light rail train system.

Twoawards for businesses/employers have been created (10). The Age Smart Employer Award seeks to recognize employers who foster a workplace that encourages different generations to work productively side-by-side and that have policies and practices that benefit older workers. The Age-Friendly Business Award will be presented to businesses committed to creating a welcoming environment and providing good service for older adults and people of all ages and with demonstrated business practices that best serve older adults in Portland.

The age-friendly initiative has also offered an annual event focused on older adults as consumers that informs them of services that can allow older people to age well so they are more aware of existing services and supports. Over the past two years, the conference has increased its focus on resilience and has made an effort to include a multicultural programme.

The strength of Portland’s age-friendly programme is its focus on making recommendations concerning City and County policies that, over the long run, will enhance the city’s and county’s age friendliness.  In some cases, the age-friendly coalition of stakeholders has reviewed and made recommendations for changes in policies, while other times it has suggested new policies (for example, on equitable and affordable housing, transportation, employment practices). Currently, the city is attempting to expand age-friendly housing policies by focusing on local zoning codes revisions. The aim is to put accessible housing policy in place that requires and/or incentivizes accessible housing (no step entrances, wide halls and doors, and a bathroom and social space that can be visited by someone using a mobility device).

Portland will continue to look for opportunities for involvement on projects and policies that will enhance age friendliness at the local level, from designing urban centres and transit corridors, to low-income utility programmes and the creation of accessible and affordable housing.

Acknowledgments: This case study was written in partnership with a team from the University of Manchester led by Tine Buffel and consisting of Tine Buffel, Natalie Cotterell, Chris Phillipson, and Samuèle Rémillard-Boilard; in collaboration with Margaret Neal and Alan DeLa Torre of Portland.

(9) City of Portland (2016). 2035 Comprehensive Plan. City of Portland, Bureau of Planning and Sustainability. Retrieved from: https://www.portlandoregon.gov/bps/2035-comp-plan.pdf