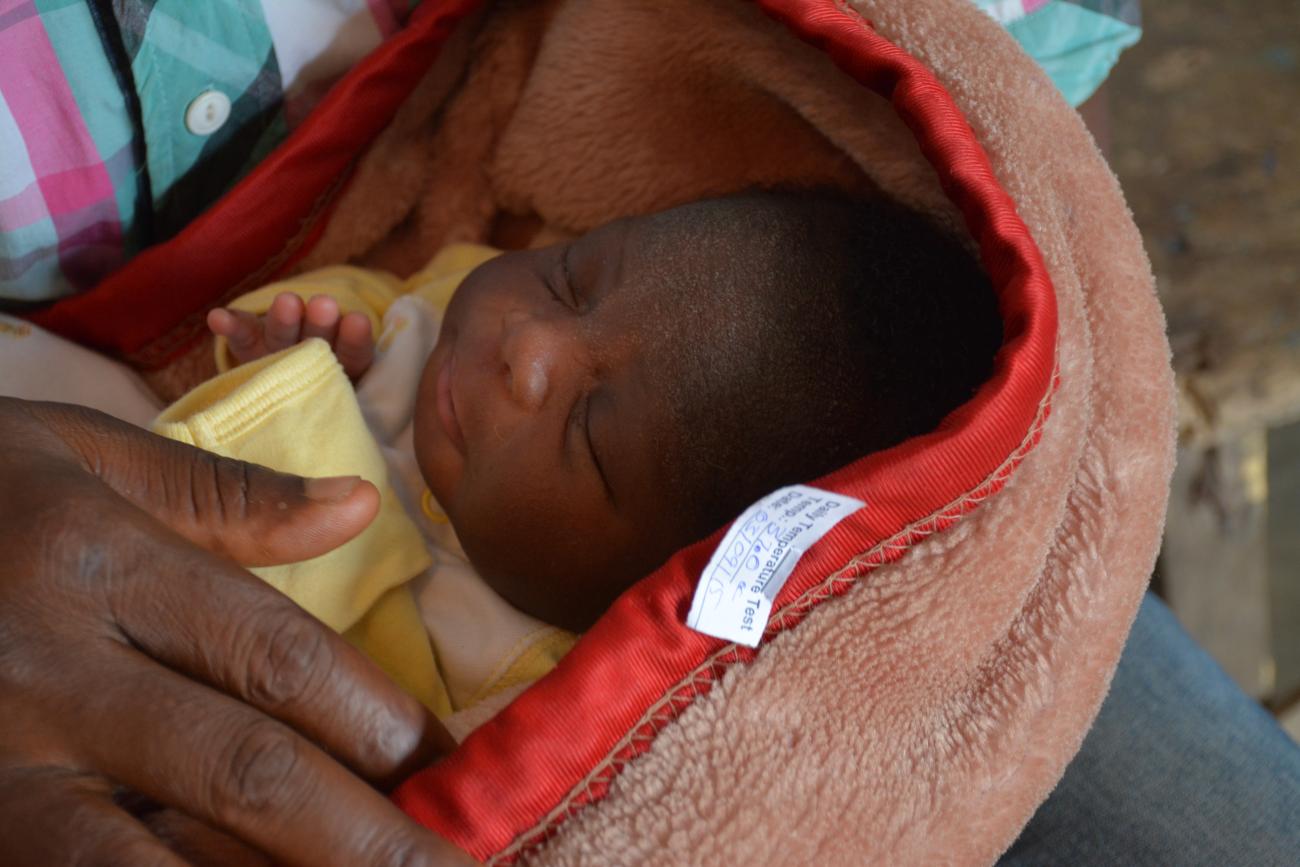 STORY FROM THE FIELD
Task-sharing for UHC: training nurses and midwives in obstetrics, neonatal care and anesthetics
Liberia
In Liberia, a transformative project is training nurses and midwives to become qualified obstetric and neonatal clinicians. It reduces the delays commonly experienced in recognizing and treating emergencies, saves lives and ensures that mothers and babies receive the health care they need.
60-Second Summary
Fact

In Liberia, a transformative project is training nurses and midwives to become qualified obstetric and neonatal clinicians.

Maternal and newborn deaths in Liberia are tragically too frequent. Every day, an event claims the lives of 4-5 mothers and 8-10 newborns. Most deaths occur around the perinatal period, immediately before and after birth.

Liberia is aiming for a 50% reduction in national maternal and newborn deaths and stillbirths by 2023, to be on track to meet SDG3 by 2030.

WHO has collaborated with the government through a formal partnership with other health stakeholders, and provides the partnership with office space, training facilities, logistical support, and funding for training.

A trainee midwife clinician in Liberia is very clear that her newly acquired skills are saving lives.

"A mother with obstructed labor referred to our rural hospital when my senior doctor had just left to find food to eat. I had to do a cesarean section along with the intern doctor. During the surgery, the patient had a deep posterior tear in the uterus, which was repaired without the senior doctor’s help. It was difficult, but it was done. I monitored the patient and her baby, the whole night worrying about bleeding, but she did not bleed. We had to keep the urinary catheter in for seven days to prevent a fistula forming due to the first obstructed labor, and she was discharged eight days later along with her baby.”

In Liberia, a transformative project is training nurses and midwives to become qualified obstetric and neonatal clinicians. It reduces the delays commonly experienced in recognizing and treating emergencies, saves lives and ensures that mothers and babies receive the health care they need. Through improving the first level referral hospital-based maternal and neonatal care and coordinating with community-based care throughout Liberia, the country is taking firm steps towards universal health coverage (UHC).

The nurses and midwives are being trained to far higher levels than usual in obstetric and neonatal care in what is known as ‘task-sharing’ with other medical professionals. Why is this so important? Maternal and newborn deaths in Liberia are tragically all too frequent. Every day, an event claims the lives of four to five mothers and eight to ten newborns and most deaths occur around the perinatal period, immediately before and after birth. Many deaths are due to delays in recognizing a life-threatening emergency at the community level. Other causes are delays reaching a hospital with the right facilities and staff to treat the patient, and delays at hospitals to identify and respond to the emergency. Added to this is the problem of the lack of doctors in Liberia, with only 298 doctors and 16 obstetricians available in a population of about 4.8 million. Nurses, midwives and community birth attendants have the potential to carry out critical medical tasks. 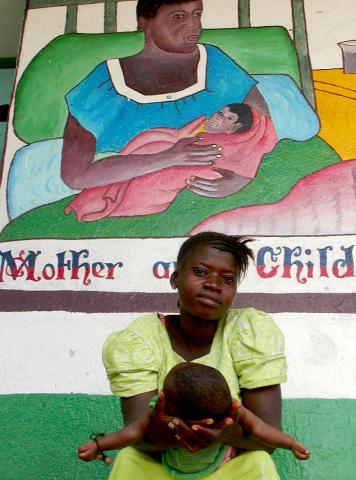 A mother waits with her baby at a private clinic in Kolahun, Liberia.
© 2005 Kevin McNulty, Courtesy of Photoshare.

Reducing deaths in women and children

For some years the Government of Liberia has prioritized reproductive, maternal, newborn, child and adolescent health to save lives and accelerate progress towards Sustainable Development Goal 3 (SDG3) targets for reducing maternal and neonatal mortality and achieving UHC. According to the latest Liberian Demographic and Health survey, the general coverage of the majority of interventions for reproductive, maternal, newborn, and child health increased substantially during 2007-2013. But there are variations in coverage across the regions with the North-Western and South-Eastern B region experiencing a 25% higher maternal and newborn mortality than the national average.

Liberia is aiming for a 50% reduction in national maternal and newborn deaths and stillbirths by 2023, to be on track to meet SDG3 by 2030. For this to be achieved, increased numbers of pregnant women and newborns must have equitable access to high-quality services in hospitals and selected health centers. Importantly, efforts need to focus on hard-to-reach communities and vulnerable women and adolescent girls and babies in 11 rural counties.

The Liberian Ministry of Health, WHO Liberia, United Nations Population Fund Liberia, and the non-governmental organization Maternal and Child health Advocacy International (MCAI) have collaborated since 2013 and later created a formal partnership. They started work together on an innovative task-sharing project in advanced obstetric care and, then, a similar task-sharing project in advanced neonatal care. The Liberian Medical and Dental Council and the Liberian Board for Nursing and Midwifery provide regulation and licensing for the project. The project has been implemented for six years and is now being scaled up and rolled out to a large proportion of rural Liberia. WHO hosts the Partnership and its day-to-day functions at the country level and provides office space, training facilities, logistical support, and funding for training of the midlevel obstetric and neonatal advanced training and apprenticeship. It has also facilitated and conducted a baseline needs assessment, and independent evaluation of the work with funding support from Irish Aid.

The training follows a curriculum developed by MCAI with technical input from WHO and approved by the Partnership. It combines ongoing academic classroom-based teaching, practical apprenticeship-based training, and rigorous continuous assessment. Liberian and international experts work together for class-based teaching and ongoing evaluations. However, sustainability is essential, and Liberian doctors mainly conduct obstetrics apprenticeship component with minimal reliance on international experts.

Representatives of the Partnership carefully selected experienced midwives, nurses, and community birth attendants to undertake extensive training and undergo rigorous continuous assessment, to become qualified obstetric clinicians after three years and qualified neonatal clinicians after two years. At the end of their training, each skilled clinician is capable of safely and independently performing advanced obstetric care, including abdominal surgery and advanced neonatal care. It means they can work more effectively in partnership with doctors to treat patients and to avoid dangerous delays in managing life-threatening emergencies. The approach has transformed patient care coordination and integration.

From the start of the advanced obstetric training in October 2013 to November 2017, the first 11 trainee obstetric clinicians undertook a total of 1,654 Caesarean sections. Neonatal care for babies with life-threatening breathing difficulties has significantly improved. From August 2017 to November 2017, 65 babies with respiratory failure were successfully treated with nasal continuous positive airway pressure and discharged home. This treatment would not be available without the neonatal programme and most of these 65 babies would have died without this treatment 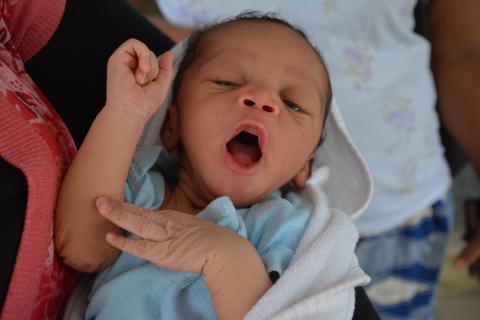 The landmark task-sharing project in advanced obstetrics has led to 11 qualified obstetric clinicians, currently supports nine interns who have completed 2 of the three years of training, and from 1 February 2018 took on ten new trainee obstetric clinicians. The success of this project has recently led to the roll-out of the training to include advanced courses in neonatology and anesthesia.

Integrating obstetric, neonatal and anesthetic care is, therefore, vital for improving Liberia’s response to emergencies and reducing the deaths or disability of mothers and babies. Highly-trained health professionals including nurses, midwives and community birth assistants, working together in teams in rural hospitals and health centers, is critical for providing adequate health services. As referral systems between the community and primary referral hospitals grow stronger, community health workers play a vital role. They offer an active community outreach component, connecting communities and families with the health system, which is growing ever more compelling. Quality health care that is well coordinated, integrated and linked at the primary health care level is part of the all-important steps towards UHC.