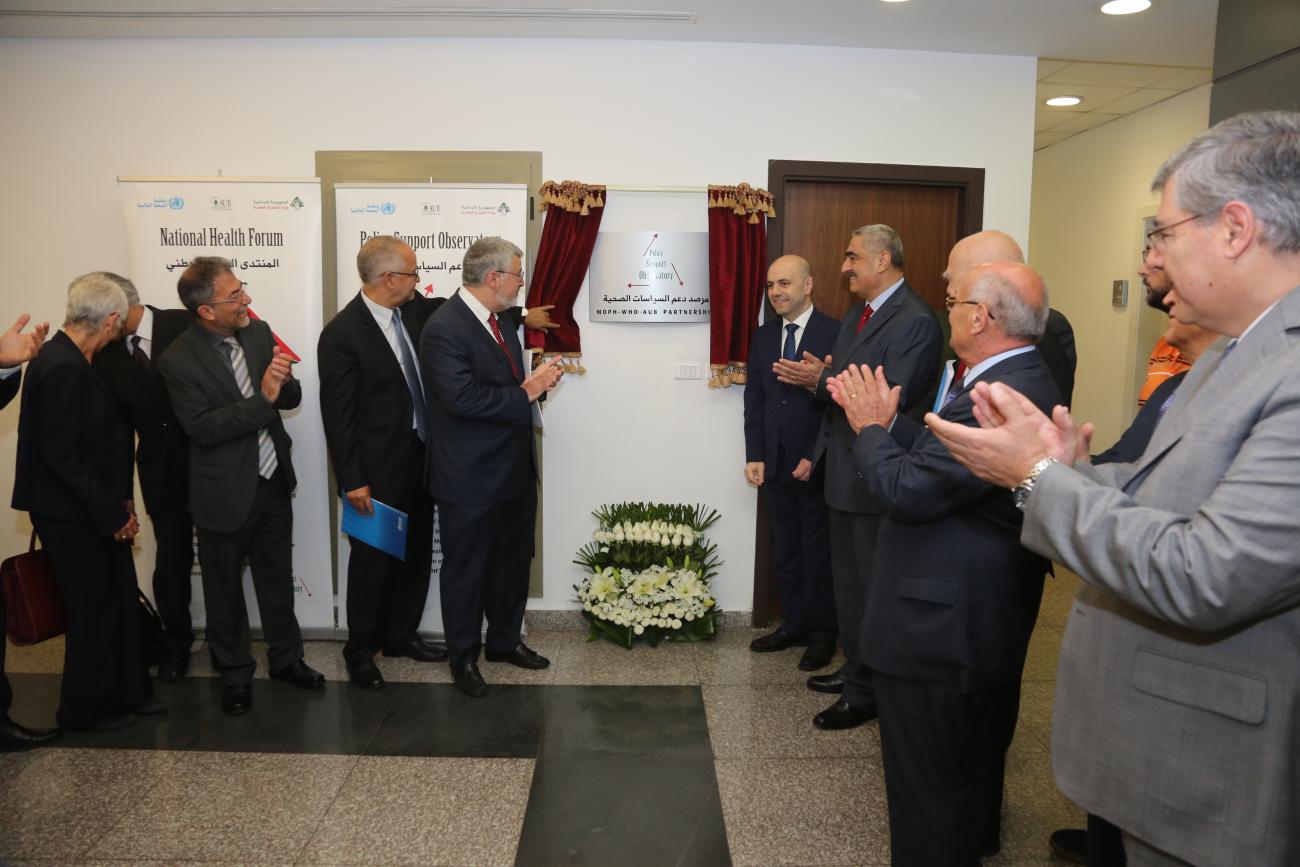 A new Policy Support Observatory (PSO) is strengthening the governance of the health sector in collaborative ways. The PSO encourages reliance on scientific evidence and knowledge to inform health policy and engages networks of partners.

The health system will become stronger through institutionalised sources of intelligence and evidence, collaborative decision-making and political consensus sought among stakeholder networks.

The PSO was launched by the Ministry of Health in April 2018, in partnership with WHO and the American University of Beirut Faculty of Health Sciences. WHO is now supporting the implementation of several PSO projects.

WHO is committed to working with the Ministry of Public Health to make this initiative a success. Achieving universal health coverage requires countries to build a consensus not only on the scope of services to be covered, but also how they are financed, managed, and delivered. Lebanon’s Policy Support Observatory will help the Ministry of Health do all of that.

The health sector today is characterized by interdependence, networking and multisectoral cooperation, and this initiative will contribute to promoting effective and flexible collaborative approaches to health sector governance in Lebanon.

The PSO works by encouraging reliance on scientific evidence and knowledge and facilitates the work of the “National Health Forum” (NHF), a platform for systematic open and transparent collaboration among national health stakeholder networks. The NHF engages various networks of national and international partners, academia, non-governmental and governmental entities. The PSO informs new or existing health policies and projects to strengthen the health system.

The PSO and the NHF demonstrate the Ministry of Public Health’s (MoPH) commitment to improve the health system in meaningful ways. The Lebanese Health Strategic Plan 2016- 2020 highlights health sector governance as one of the four strategic goals to make progress towards universal health coverage (UHC). WHO is proud to play a roleto support this vital work through supporting the PSO’s conceptualisation and technical implementation of projects.

In 1998 the MoPH decided to take action. It made the transition from its role as the direct service provider to modernizing its governance and regulatory capacity. It did so using the power of information, surveys and studies. Working through a set of networks with a large variety of stakeholders provided information on the geography of interests and positioning of professionals, organisations, consumers and political actors; this has been essential to develop rational policies and strategies.

As a result, the MoPH developed a home-grown collaborative governance style that moved it from being a passive bystander to the main steward of the health care system. Initially, those arrangements were occurring on an ad hoc basis, risking long-term sustainability.

The PSO contributed to institutionalizing the MoPH’s reliance on evidence for policy making. It also facilitates the MOPH led collaborative governance by expanding it in two dimensions. First, a ‘technical’ one that takes full advantage of strategic intelligence sources: scientific evidence, operational knowledge and mapping of stakeholder’s interests. Second, a ‘political’ one of building social consensus through systematic, open and transparent collaboration with stakeholder networks. This not only enhances the resilience of the health system but also provides structured analytical and decision-making support capacity that will help spread innovation and facilitate sharing and adoption of best practices.

In April 2018 the MoPH, in partnership with the WHO and the American University of Beirut (AUB) Faculty of Health Sciences, launched the PSO through the tripartite collaboration agreement. The PSO is physically hosted at the premises of MoPH for proximity with its departments yet is intended as an instrument for integrated, but not incorporated, support to the MoPH. The PSO received the utmost endorsement at its launching event where the highest leadership of all three institutions participated from national, regional and international levels including: former Minister of Health and current Deputy Prime Minister of Lebanon Ghassan Hasbani, Director General Dr. Walid Ammar; WHO Director General Dr. Tedros Adhanom Ghebereysus, former WHO acting regional and country directors Dr. Jawad al Mahjour and Dr. Gabriele Riedner; AUB president Dr. Fadlo Khuri and Dean of FHS, Dr. Iman Nuwayhid as well as representatives from various ministries, public institutions, and professional associations, in addition to experts and researchers from all over Lebanon.

"The project we are launching today is not a new one aiming at fulfilling wishes and possible future goals, the Policy Support Observatory is to consolidate existing practices and sustain previous achievements,” said Dr. Walid Ammar, Director General of the MoPH, Lebanon.

"This Observatory will facilitate communications with all parties and partners, especially citizens, to ensure the sustainability of cooperation, effectiveness and scientific policy, away from political influence or any other subjective effects,” said Ghassan Hasbani, former Minister of Health, current Deputy Prime Minister, Lebanon.

During May 2018, the PSO’s guiding committee was formed with members from the partner organizations and independent experts including WHO. By the following May 2019 the guiding committee held its third meeting to discuss progress on the implementation of the work programme, and welcomed a new member from the Saint Joseph University joined; a testament to the high interest the PSO was gaining among academic circles. The MoPH also enjoys strong collaboration with the AUB. Currently, the AUB through its Faculty of Health Sciences is a member of the PSO guiding committee and in collaboration with WHO oversees work-packages to operationalize the PSO. 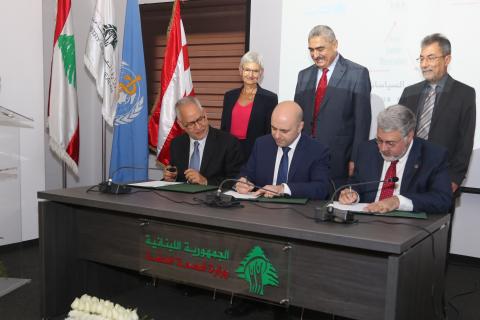 Signing of Memorandum of Understanding. Photo: WHO Lebanon Office.
Image/s 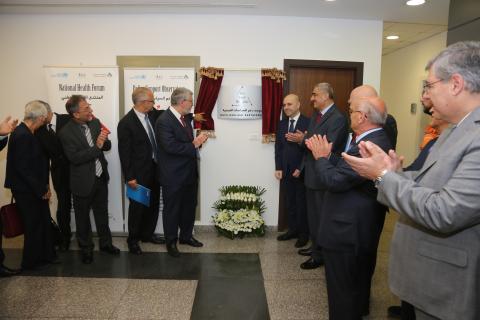 Launch of the PSO. Photo: WHO Lebanon Office

A landmark in PSO’s existence was formulating its work programme of projects based on their alignment with the MoPH agenda and opportunities to move forward. The projects were identified based on several consultations with MoPH departments, partners, experts and discussions during two first guiding committee meetings.

In 2018, Lebanon joined the Universal Health Coverage Partnership (UHC Partnership), which is co-funded by the European Union, the Grand Duchy of Luxembourg, Irish Aid, Japan and France. Under the UHC Partnership and EU Madad funds, WHO is supporting the implementation of several PSO projects including interventions to explore the feasibility and development of a deployment strategy for use of state-of-the art Electronic Health Records; a plan for a national Health Information Management System; and establishing care coordination, referral pathways and reprofiling of Primary Health Care teams for people-centred care.

In parallel, WHO also supports knowledge production for assessing the targeting of public resources to vulnerable populations; surveys on providers’ practice profiles for in-depth insights on re-organizing service delivery in a cost-effective way and possible options for task shifting among providers; and assessing service user expectations, preferences and health seeking behaviours. It also supports other work for reinforcing the pharmaceutical sector through expanding the Bar Code system and supporting the automation of the Early Warning, Alert and Response System (EWARS), as part of efforts to advance health security.

"The voices are calling for bridging the gap between scientific research and the process of policy-making and decision-making, especially the gap between the academic sector and the government,” said Dr. Fadlo Khuri, President of the AUB

In conclusion, the PSO is modernising a traditional administrative approach by allowing the MoPH to reinforce its authority and institutionalize strategic intelligence and collaborative decision-making. The PSO will assist the NHF to serve as an important platform to foster policy dialogue to develop more reliable and shared policy objectives in order to make genuine progress towards UHC.